The OSCAR product is a direct computation of global surface currents using satellite sea surface height, wind, and temperature. Currents are calculated using a quasi-steady geostrophic model together with an eddy viscosity based wind-driven ageostrophic component and a thermal wind adjustment. The model calculates a surface current averaged over the top 30m of the upper ocean.

In 2009 the OSCAR product was developed to calculate data on a 1/3 degree grid. Many smaller-scale features are now observable in the higher resolution model, for example the Gulf Stream rings in the images below. The spatial coverage of OSCAR has been extended to as close to the coast as possible, variable with time, expanding and contracting with the bounds of the satellite data. A former bias in velocity magnitude with latitude in the OSCAR 1-degree data is now removed with the improved resolution. A dynamically improved model for the equatorial region has been developed and implemented in the 1/3 degree OSCAR system. 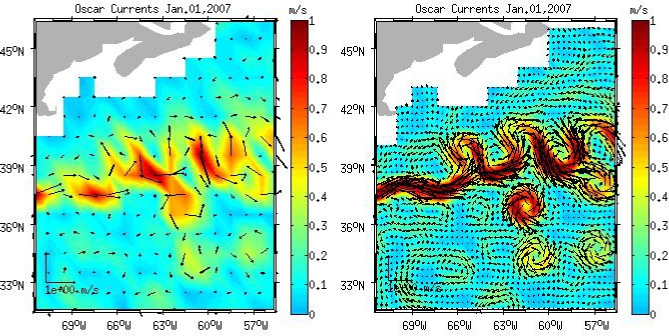 OSCAR is an ongoing research project intended to improve the calculation of surface currents from satellite data, and validation methods. At present, currents averaged over the top 30m of the ocean are provided on a 5-day timebase, with a 10-day smoothing, based on steady Ekman dynamics. OSCAR is provided on both 1 degree and 1/3 degree grids. There is an additional filtered product in the 1 degree version. The 1 degree OSCAR and in particular the 1 degree filtered OSCAR are being produced for users who wish for a quick-look of conditions in a large area. The filtering is a butterworth filter designed to smooth over the data. This data will not be produced after this summer. However, a 0.25 degree daily version of OSCAR with no temporal filtering is being produced and will be released later in the summer of 2016.

The quasi-steady calculation has been proven to be successful for steady winds and on basin-wide scales. However, to capture small-scale wind-driven surface currents, unsteady dynamics must be included in the model. Ongoing research goals are to develop the wind-driven component to include local time-dependent wind dynamics, to exploit the enhanced vector winds from multiple satellites, to incorporate vertical mixing processes, and to investigate vertical processes controlling basin-wide transport.

Earth and Space Research continually performs extensive calibration and validation with both 15m drogued drifters (World Wide Drifter Buoy Deployment data, http://www.aoml.noaa.gov/phod/dac/gdp_doc.html) and with moorings from the TAO/TRITON and PIRATA arrays, from the PMEL Ocean Climate Station (OCS), and other sites within the global network of OceanSITES time series reference sites.

OSCAR has a broad user interest. The NOAA OSCAR website received 72,897 hits in January 2010 from 3556 unique domains in 73 countries and was linked to from 951 websites. Additionally, in the same month, the OSCAR OPeNDAP interface received 8633 hits and delivered 2.4 Gigabyes of OSCAR data. OSCAR has a strong user base in the boating community. The data are also in use for fishery resource management research, marine animal migrations studies, and other maritime applications. OSCAR can also be used indirectly in determining wind stress and bulk air-sea fluxes since in air-sea flux algorithms the wind stress and heat fluxes depend upon wind relative to surface flow. A real-time version of OSCAR with daily output was used to map the circulation in the Gulf of Mexico during the oil spill. The OSCAR analyses have been used extensively in climate studies, such as for ocean heat storage and phytoplankton blooms. Monthly maps and anomalies are published every month in the Climate Diagnostic Bulletin, January 2001-present. They are used routinely to monitor ENSO and to test prediction models, with the surface current ENSO index typically leading the SST index by months (see ESR’s ENSO Index).