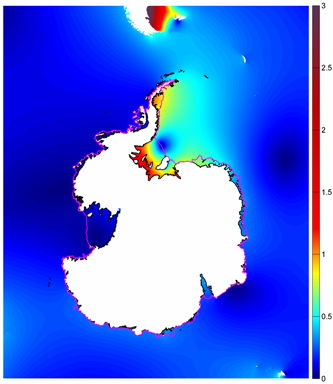 CATS2008 is a high-resolution regional inverse model of the entire circum-Antarctic ocean. The model domain includes ocean cavities under the floating ice shelves. The coastline is based on the MODIS MOA [Scambos et al., 2007] feature identification files, adjusted to match ICESat-derived grounding lines for the Ross and Filchner-Ronne ice shelves and Interferometeric Synthetic Aperture Radar (InSAR) grounding lines. The water depth map for open water is based on the 2007 release update to Smith and Sandwell [1997].  Adjustments to this map have been made in various regions, including the open continental shelf in front of the Larsen-C Ice Shelf which has been blended with GEBCO bathymetry.

The model development follows two primary steps. We first develop an optimized forward model used direct factorization of the linearized shallow water equations, forced at the open boundary by tide heights from the global inverse model TPXO7.1 and by the astronomical potentials. The model is tuned to data by the use of a linear benthic drag coefficient rather than the more usual quadratic drag formulation. Each of the ten primary tidal harmonics is tuned separately. While the optimized forward model is not as accurate as could be obtained with more sophisticated tidal physics, it creates a relatively accurate “prior” model for use in the next step of data assimilation.

The second step is to assimilate available data sets. We assimilate (i) TOPEX/Poseidon radar altimetry from the open ocean when no sea ice is present, (ii) a set of ~50 “high quality” tide records (including bottom pressure recorders, coastal tide gauges, and a few long-duration GPS records on ice shelves), and (iii) ICESat laser altimetry data at crossovers on the Ross and Filchner-Ronne ice shelves (see Padman and Fricker [2005, 2008]). The set of assimilated tide records is drawn from the larger set described at our Antarctic Tide Gauge Database web page.

Contact Laurie Padman for advice about the use of this model.