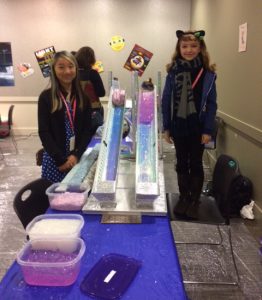 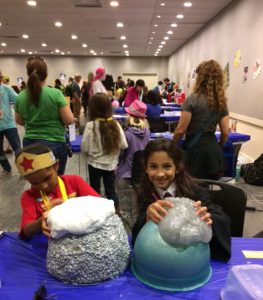 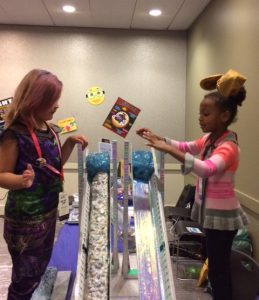 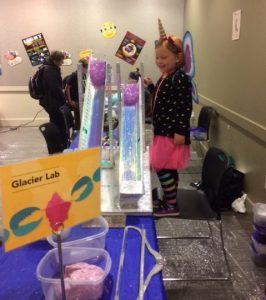 More than 12,000 people attended Geek Girl Con (GGC) 2017, over the weekend of September 30 and October 1. GGC is an annual conference in Seattle, WA, dedicated to empowering women, girls, and non-binary “geeks” to pursue their interests in science, technology, comics, literature, gaming, and other areas. A perennial feature of Geek Girl is the DIY (Do It Yourself) Science Zone, where scientists from around Seattle and elsewhere provide opportunities for younger attendees, and the young-at-heart, to learn about different areas of science through hands on activities. ESR Research Scientist and NASA Jet Propulsion Lab (JPL) Affiliate Daria Halkides, with assistance from graduate students Kristiana Lapo (Western Washington University, Geology) and Shirley Leung (University of Washington, Oceanography), represented ESR and JPL over the 2-day conference, presenting content from NASA’s Ice Sheet System Model (ISSM) Virtual Earth System Lab (VESL).

VESL allows users to run NASA’s ISSM through a user-friendly, web-based graphical interface, in order to better understand the role of the polar ice sheets in Earth’s climate and sea level. It is a work-in-progress collaboration between Dr. Eric Larour at the Jet Propulsion Lab (who leads the main VESL branch for researchers and scientific model development), Dr. Halkides at ESR (who leads the science education outreach component), and student members of the ISSM development team at the University of California, Irvine (UCI) and at Cal Poly Pomona. Student team members, involved in developing most technical aspects of VESL, receive computer science course credit for their work. Some continue on as paid student interns for the project. The educational component of VESL received seed support in 2014, for initial development, from NASA’s Cryospheric Sciences Program, but long-term funding is still being sought. The branch for researchers is funded by NASA’s Cryosphere Sciences Program, as well as the NASA Sea-Level Science Team Program.

As for GGC 2016, this year’s 2-part VESL exhibit at GGC 2017 addressed the question What Affects a Glacier’s Speed?, although multiple updates were made to the experiment apparatus and other aspects of the exhibit.  In tabletop experiments, participants tested how differences in mass, incline angle, viscosity (analogous to what glaciologists call ice rheology), and substrate conditions (whether the bedrock is smooth or bumpy) affect behavior of the non-Newtonian fluid, flubber (sometimes called gak), on an incline. Made from a mixture of school glue, borax soap and water, Flubber mimics the behavior of glacial ice under pressure, so it is often used to simulate glacier behavior in labs and classrooms.  These experiments were followed by computational model experiments, in which participants used VESL’s user-friendly, web-based interface to increase snow or melt over Alaska’s Columbia Glacier basin, then ran ISSM forward in time to see the glacier flow rate and thickness responses across the basin.  Participants applied concepts learned in the tabletop experiments to the design, execution and interpretation of their own model experiments.

Overall, the event was a success, and plans have already been made for ESR’s participation in the DIY Science Zone at GGC 2018.

ESR scientists engage in science education outreach throughout the year, including K-12 STEM fairs at schools across the greater Seattle area. The glacier/VESL exhibit presented at GGC 2017 is available, upon request, as a presentation option.