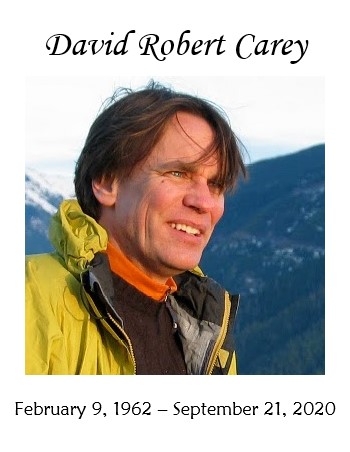 On Monday, September 21, our colleague, David Carey, passed away unexpectedly. ESR lost not only a talented programmer and scientist, but also a kind, generous friend, who was always ready to help with any task or problem, at work or at home.

David joined ESR in 2011, and soon began work on Aquarius, maintaining the Aquarius Validation Data System that matches up satellite salinity observations and in situ measurements. With the launch of SMAP, David played a central role in the development of the Salinity Validation Data System. He also worked on developing algorithms and preparing datasets for the NASA-ESA Salinity Pilot Mission Exploitation Platform.

David grew up in Steilacoom, Washington, pursued diverse interests from bike shop mechanic to video producer, and eventually received his degree in Atmospheric Sciences from the University of Washington. He enjoyed cycling, sailing, and talking with friends over beers at happy hours. He is missed by all who knew him.

He is survived by his loving wife Babette, his brother John, a niece, and a nephew. They have set up a memorial page that is linked below: