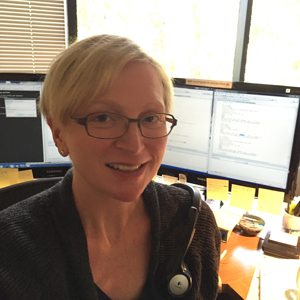 Dr. Gentemann began her career in oceanography while an undergraduate at MIT where she worked with Detlef Stammer and Carl Wunsch on the inverted-barometer correction for TOPEX/Poseidon. She completed a MS in Physical Oceanography at the Scripps Institute of Oceanography in 1997, working with Rick Salmon on modeling surface-quasi-geostrophic flow. In 1998 she joined Remote Sensing Systems, working on air-sea interactions, diurnal warming, passive-microwave sea surface temperature retrievals, instrument calibration, and radio frequency interference.  While working at RSS, from 2003-2007 she completed a Ph.D. at the University of Miami with Peter Minnett, researching diurnal warming in the upper ocean.  In 2016 she joined Earth and Space Research to continue her oceanographic research.  In 2017 she was appointed a Visiting Scholar at NASA’s JPL and an affiliate at the University of Washington.

Dr. Gentemann has participated in a number of science teams and committees, including several for the National Academy of Sciences, NASA, NOAA, AGU, JAXA, and the Group for High Resolution Sea Surface Temperatures (GHRSST). She has been the Principal Investigator for the US component of GHRSST, the Multi-sensor Improved Sea Surface Temperature project, since 2004. In 2008 she was awarded the National Oceanographic Partnership Program’s Excellence in Partnering Award and in 2013, the American Geophysical Union’s Charles S. Falkenberg Award.  She was the Principal Investigator on 3 large academic/governmental/commercial partnership projects, coordinating with over 20 scientists on each project.